Laying in her bed, looking at the ceiling with tears in her wrinkled brown eyes, is a woman whom has 90 years of experience. She lays there quietly as the tears stream down the creases of her fragile skin. She considers picking up her hand to wipe the moisture from her face, however, the task seems too large for her to bear. 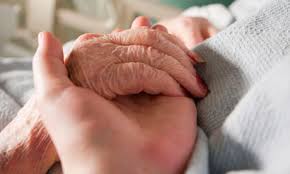 She lays still on her back, conscious of the urine that is collecting in her pants, but unable to do anything about it. She is in pain and though she hates laying on her back, the nurses insist it’s for her benefit. Though she is an adult, she no longer has the choice of how she may lay. She is also unable to get herself to the commode quick enough for the likings of her bladder.

She reaches for the red button. The button that is supposed to bring in the people who “help”, but realistically, she feels like all they do is hinder. It’s humiliating to have the nurses come in to change her diaper. Most of the time the nurses hardly speak to her anyway. If they do, they are condescending, speaking to her like she is ignorant, or perhaps of that as an infant. It’s frustrating that she is no longer respected as a functioning member of society.

She fondly remembers the days she was teaching classes at the local university. She remembers with ease her beautiful husband who had passed away 15 years prior, and how every day since she longs to be at his side. She goes back to the day she birthed her 5 children. The same five that have forced her to live in this place, saying it’s for the best. The same five who visit only twice a year. She finds herself missing them every day, but trying not to be bitter because she understands. She’s old. She’s unable to do the things that she once took pride in.

The part that bothers her the most is that her mind is not like that of her body. She feels pain, she sees how people treat her, and she has stories, lots of them and nobody to tell them to. She has knowledge that she could share, but has nobody to share it with. Mentally, she’s bored, which she discovered was far worse than physical boredom. She lay in the bed wondering when her life became so simple that jello was the only thing she had to look forward to.
She wondered how long she was forced to live as a hinder to the world. She silently closed her eyes, squeezing the droplets out, longing for her end to come, missing more than anything the people she loves who are now gone or who have forgotten her.

She lays there, pleading with God to take her home, or at the very least bring her someone to talk to. Not everyone has the money to “pay it forward”, however, anyone, young or old has the ability to make a life worth living by being a friend.