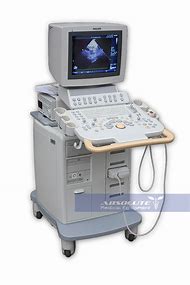 I had to take my daughter for testing today. This is a typical feat for a kid that has weird random illnesses. No big deal. We’ve done this many times before. I watch as the pull my daughter’s shirt up, they pour the goop all over her belly, and then they grab the instrument that looks like a microphone and start pressing on random spots of my daughter’s tummy.

I’m watching the screen intently, not that I have a clue to what I’m looking at. Periodically, the tech will type some random initials in and I can understand a few things, but not everything. For example, I saw GB and knew we were looking at a gallbladder. There were a bunch of other things I wasn’t sure about. Regardless, I’m staring at the screen as if I’m trying to spot some strange abnormality- as if I would even recognize it.

I say to the lady during the process that the organs look nothing like the ones in the diagrams in college. She started to laugh and agreed with me. A few moments pass and I get the giggles. I swear so help me God, I was looking at a baby tyrannosaurus in my kid’s abdomen. The thing was standing upright and facing right. It’s tail went down to where I would assume the bladder to be and it was standing there right before my eyes, with its mouth wide open.

My daughter and the tech looked at me and I just shrugged. I didn’t want to embarrass my daughter. That is until I saw the Christmas tree forest growing out of my child’s belly button area. It literally looked like six or seven trees standing upright. I blink a few times, wondering if I’m hallucinating, but nothing else seemed out of place- so I decided to be candid about what I saw.

“Holy cow! She looks like she’s growing a Christmas tree farm!” I said. The tech nodded in agreement, though she didn’t appear to think this was abnormal. I decided to quiet down and let her work. As soon as I chilled out, I saw my worst nightmare come to life.

Floating around in my daughters belly was an alien. It had two very big black eyes and a wide opened mouth. Its mouth closed and opened periodically. I stood in horror watching this, this parasite feed off my daughter! I couldn’t keep quiet.

“It looks like she’s birthing an alien!” I said. Mind you, my daughter is NOT pregnant. She’s there due to illness. The tech got the giggles. I wasn’t joking. I would have had nightmares if I had to look at random beings like that every single day.

She finished her work and thanked us. She then smiled at me and said, “You have quite the imagination.” I just shook my head.

“I don’t think so, but I question if my daughter has PICA. I saw the dinosaur, a whole tree farm, and an alien invasion. I feel like she ate something from Toy Story. The two just looked at me and laughed. I left knowing that is a job I just couldn’t do.