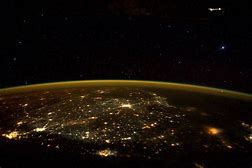 I had to pretend to understand their language. My life depended on it. I watched as they were killing people off one-by-one. I wanted more than anything to live. My adrenaline was pumping. I was sitting in their ship, quietly, hoping more than anything that they wouldn’t discover that I’m human.
They would speak, and I would watch. Periodically I would nod as if I knew what they were talking about. I looked like them, but I wasn’t one of them. They passed me by several times. I hoped they believed that I was them, but I feared they would turn at any moment and slice my throat the way they did the other humans.
My heart pumped. Part of me wanted the entire situation done with, the other part was struggling to survive. When would this finally be over with? I wanted to be home. Why did they pick me to begin with? How did I even end up here? It made no sense, yet there I was.
When I woke up, I looked around my dark room, grateful that it was just a dream. I glanced at my husband and smiled. The one thing about being a creative writer is that dreams get totally weird and they seem so real. I smiled as I pulled the blankets up around my neck and went back to sleep, in anticipation of another crazy dream.